Behind the Book Cover of The Other Side of the Wire

In the publishing world, a book cover is a critical component to success. Compelling design makes a strong first impression before the audience even reads a single word. It sets the mood and takes the first swing at a sales pitch. The cover’s overall purpose is to give away just enough to persuade the reader and capture the story inside, without revealing too much.

There are overt themes to Harold Coyle’s newest work of historical fiction, The Other Side of the Wire, like World War II and coming-of-age, but there are quieter points of investigation as well that are still prominent and important: ideas like identity, isolation, and innocence. When designing and selecting a cover for this recent Master Wings Publishing release, it was important that the final choice would as much as possible represent the full picture of the novel. This was, in the end, why the final cover was chosen over other options. As the author Harold Coyle explains, it “comes closest to reflecting all the themes of the story.”

Below you can see a few initial drafts for the cover that were not selected. While they are all striking, and definitively demonstrate an understanding of the text, we decided the final cover of the child standing alone, peering through a fence, pulls sentiment more strongly than the smoke and flags of draft one, for example, and illustrates the searching and role of the novel’s main character better than the face-on appearance of the second option. We wanted the audience to know upon simply viewing the cover that this was a book about a child, set in World War II, striving for identity and justice in a large and oppressive world. Cover one gives us no depiction of the protagonist, potentially leading a causal viewer to think it was a maneuver and military heavy title, and the protagonist on cover two sits far more strongly, largely, and passively than the actual main character behaves. 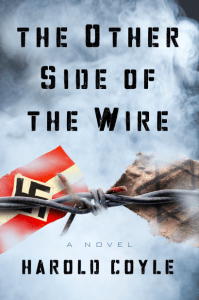 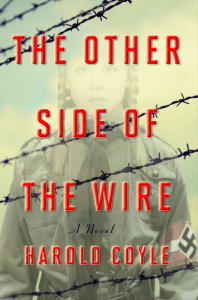 Which cover do you like best? Why? Do you agree with our decision?

The book is available for purchase here. For some other discussion points and investigation of themes check out our list of discussion questions here.