The story of the Bach House and Chicago’s history are deeply intertwined. Now, this shared legacy is beautifully captured in Frank Lloyd Wright’s $10,000 Home – History, Design, & Restoration of the Bach House by Robert “Bob” Hartnett. He believes that architecture plays an important role in our communities, and that the Bach House is a central part of Rogers Park’s history.

On July 6, Bob Harnett discussed his book in a webinar hosted by Monona Terrace and sponsored by Wright in Wisconsin. During this discussion he shared details about the history of the Bach House, images of inside and outside of the home, a video of the challenges that the restoration teams faced, and new information about the custom interior furniture. To recap some of the highlights that Bob went over, read below.

The Great Chicago Fire: After the devastating fire destroyed more than 17,000 buildings and killed hundreds of people, the powers that be declared that no more wood buildings could be built in the downtown area.

Chicago’s Bach Brickyard: Brick was in high demand after the fire, and Emil Bach’s family found success by creating and running the Bach Brickyard. Emil Bach decided to build a home in Rogers Park area, which had a rural feel at the time. Ironically, Frank Lloyd Wright did not like the color of Bach bricks, so there are no Bach bricks in the Emil Bach House.

Prairie Style Architecture: Frank Lloyd Wright is known for his Prairie school of architecture – which includes features such as flat rooves, overhanding eaves, windows grouped in horizontal bands, and integration with the landscape. The Emil Bach house is the only surviving Prairie style house of this type in Chicago.

Japanese Influences: Frank Lloyd Wright’s appreciation for Japanese architecture made its way into the Bach house design. It included a Genken – a ground level area inside the main door that buffers the outside; a Tokonoma – a dedicated place to display a favorite artwork; and a Kamoi – an ornamental timber attached to a wall that separates the main room and the ceiling.

The Great Depression: The 1929 stock market crash and resulting Great Depression led to hard times for Bach Brickyard. In 1934, Emil Bach sold his beloved home and moved to be closer to his wife’s family in California.

TAWANI’s Restoration: A series of private homeowners passed through the Emil Bach house, some leaving the structure as it was, and some making significant changes, such as the Tea House addition. TAWANI Enterprises acquired the home in 2010 and spent newly two years restoring it, with the goal of returning it to its 1915 glory while maintaining a modern infrastructure for hospitality guests.

Modern Marvel: Today, the Bach House is part of the Frank Lloyd Wright Trail, an official Chicago Landmark, and part of the U.S. National Register of Historic Places.

Click here to learn more about the Bach House or buy the book. You may also watch Bob Harnett’s webinar here. 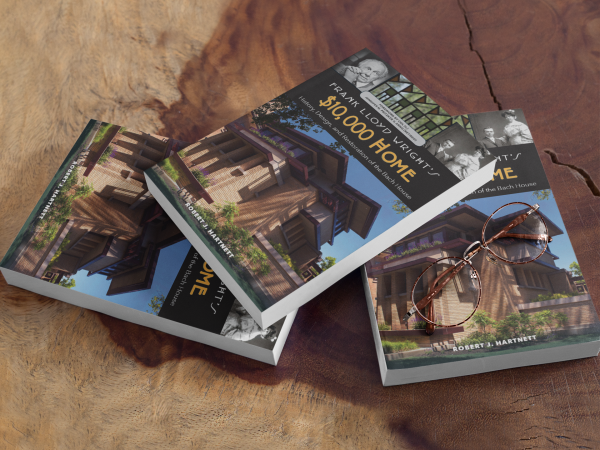