In a 1956 letter, sent forty-two years after her house was built, Anna Bach continued to extend architect Frank Lloyd Wright her “richest blessings” in gratitude for it. It was, she described, “not only a livable house but a loveable home.”

And now, sixty-three years after that letter and 105 years after the home was built, author Robert Hartnett offers his own blessings and analysis.

Author Bob Hartnett sat down with us and answered a few questions on the title. Learn more about his creative process and why you should add this book to your reading list:

1. If you could ask Frank Lloyd Wright one question, what would it be?

I would like to ask Frank Lloyd Wright what he thought were the major influences on his architecture. Many people have said that Wright was influenced by five major themes, including: (1) Louis Sullivan, (2) nature, (3) the Frobel Blocks, (4) Japanese Art Prints, and (5) music. I would like to know if Wright would agree with the items listed here, or if he would have a completely different list, or if he would even have a list at all.

2. Are there any other architects or buildings that you are interested in? Why?

I have been interested in both Louis Sullivan’s work and Henry Hobson Richardson. Both men had an influence on Wright’s early work. I have liked Sullivan’s work for his interpretation of natural elements in his designs. Richardson’s work, which has become known as Richardson Romanesque, also has such an interesting and dominating look.

3. Did anything surprise or particularly impress you when researching?

I would say one of the things I found most surprising and rewarding was how forthcoming and helpful all the people I interviewed for the book were. I spoke with people from Oregon to Massachusetts, and each person I spoke with was supportive and willing to share their time and experience with me.

4. What are you reading or watching currently?

During the quarantine, I have kept busy watching some different television series. Very recently, I started watching the movie series (don’t laugh) The Hobbit, and I plan on following that up with the rest of the Lord of the Rings trilogy. The two books I have read most recently were Mind Hunter by John E Douglas and Mark Olshaker, which was about the creation of the FBI’s behavior analysis unit, and I Hear You Paint Houses by Charles Brandt, which is the story of Frank “The Irishman” Sheeran’s life as a MAFIA hitman, and his involvement in the disappearance of Jimmy Hoffa.

I try to start with an outline of sorts, and then begin to research the topic I have chosen. I have several books on Frank Lloyd Wright in my personal library, so that is where I began to flesh out the story I am trying to convey. Sometimes this can be difficult, because I will find out that what I found in one book is contradicted by another author. In my writing, I work to get conformation from multiple sources before using a particular fact.

6. What was the hardest part of the project?

I would say that one of the hardest things to deal with is the amount of misinformation there is in the “Wright World.” Often, something will be written down that was taken out of context to make an author’s point, and then that statement gets repeated by others until it is taken as a fact, when it might not actually be completely true. When I have come across items like this, I must always ask myself, “What makes you an expert?” I do not have a degree in art, architecture, or even journalism, but I do work to be a detailed researcher.

7. Why should people read this book?

I think anyone who has an interest in Wright’s architecture would enjoy this book. One of the chapters I am most proud of is the chapter on Wright’s use of elements from Japanese architecture in this mid-western home. I think people who read this chapter in the context of the Bach House will then be able to transfer the principles I have pointed out to other work Wright had done. I also think that the book provides a good account of Wright’s 1910 – 1915 career.

Click here to order your copy of Frank Lloyd Wright’s $10,000 Home: History, Design, and Restoration of the Bach House today! 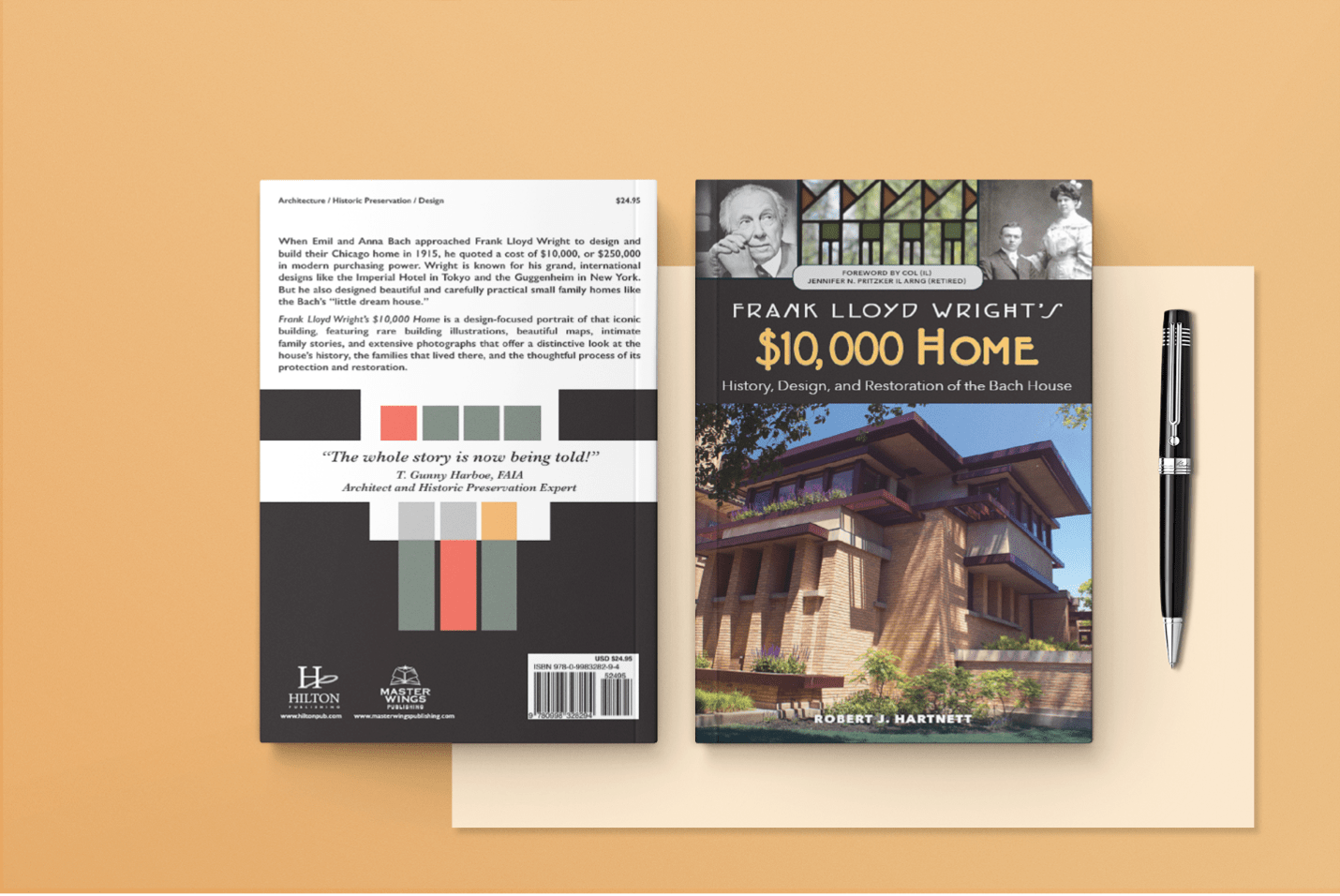